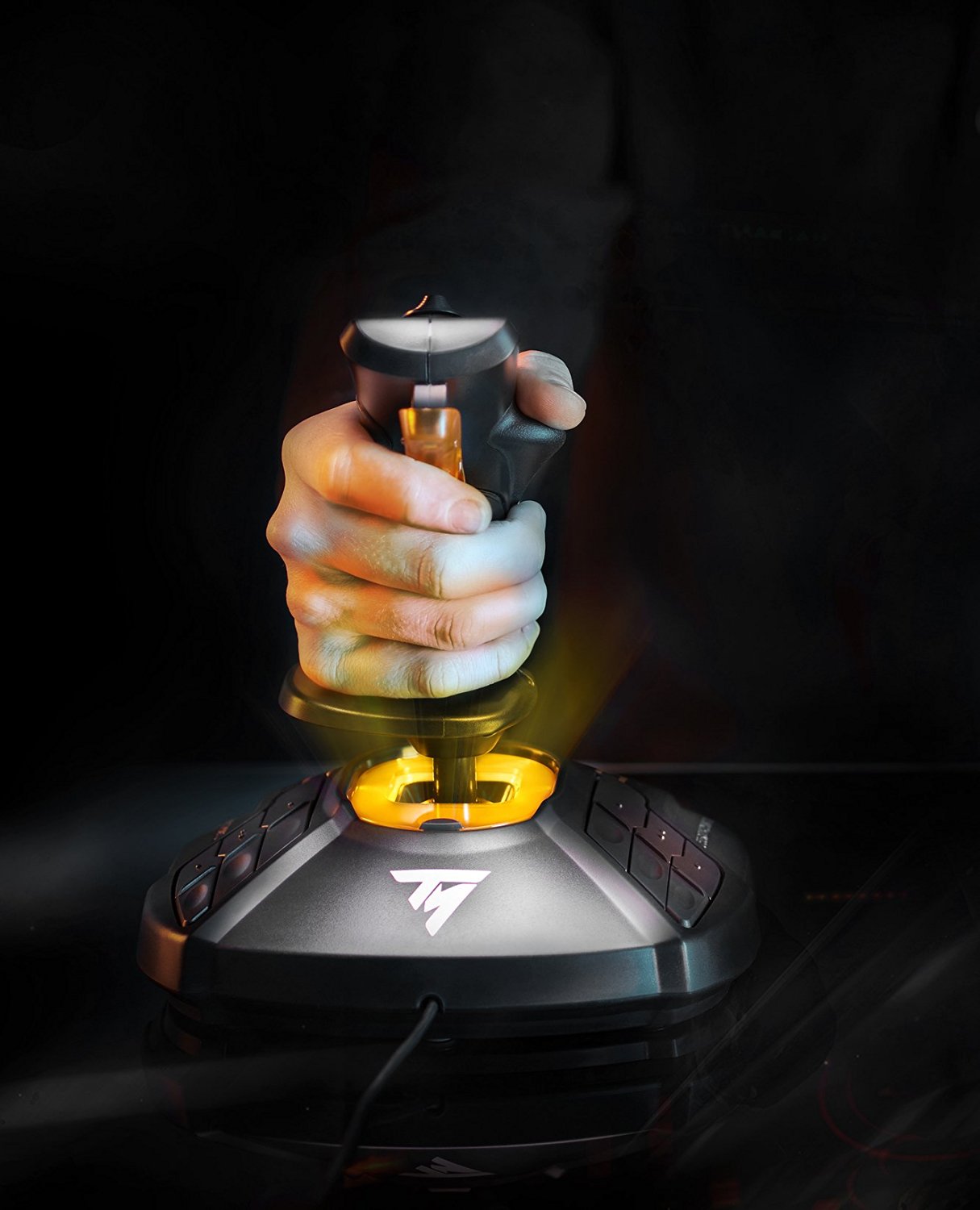 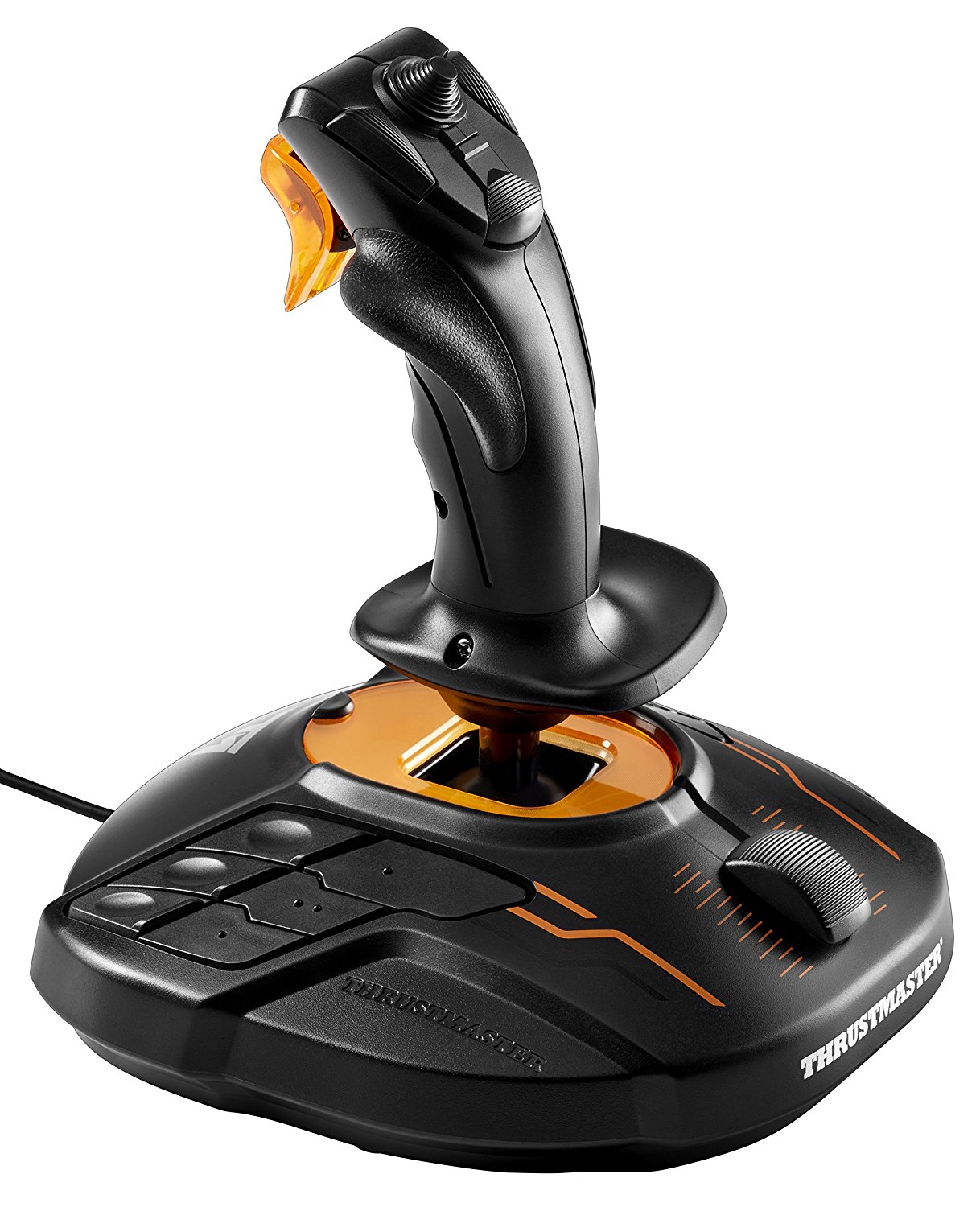 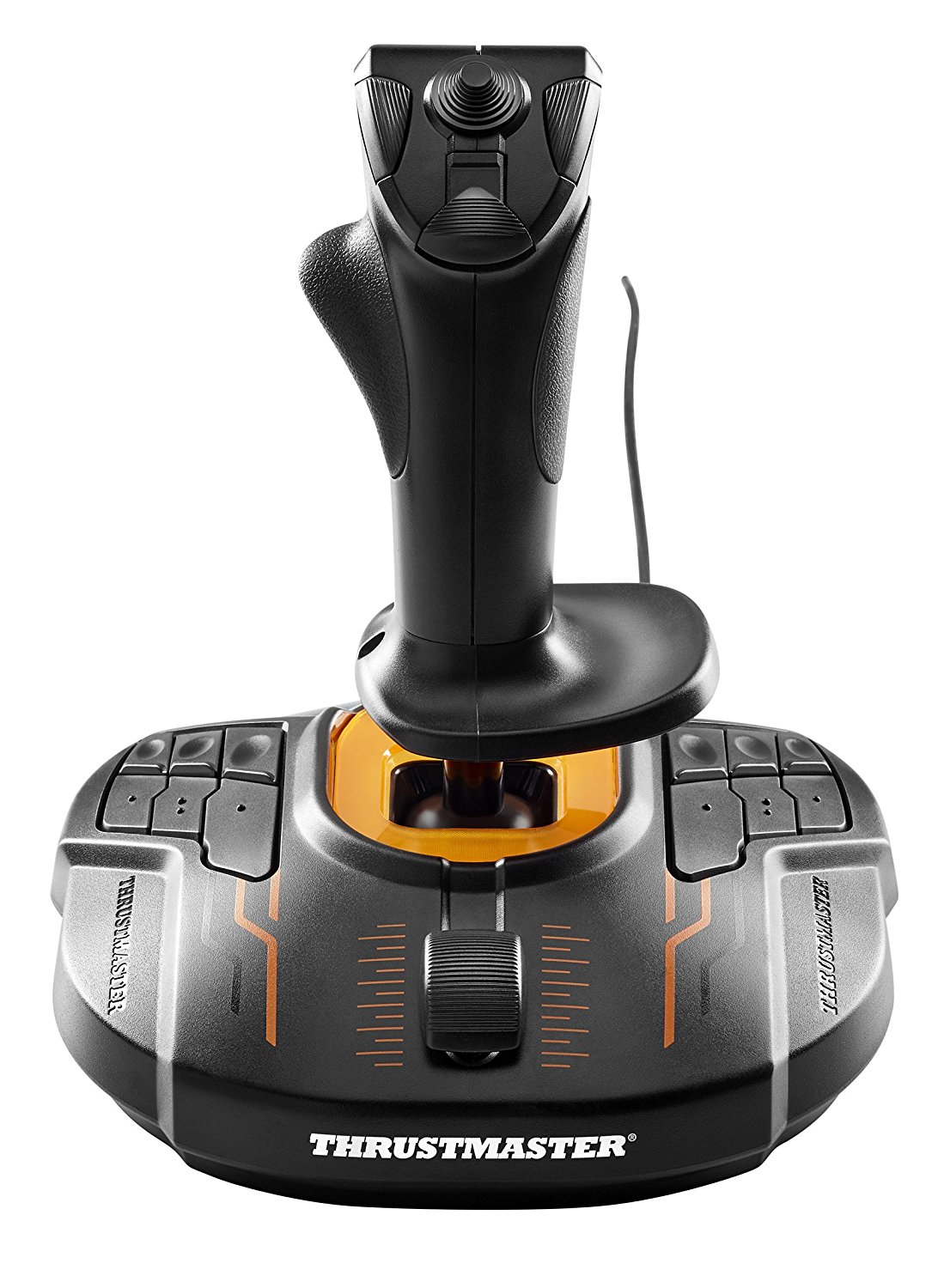 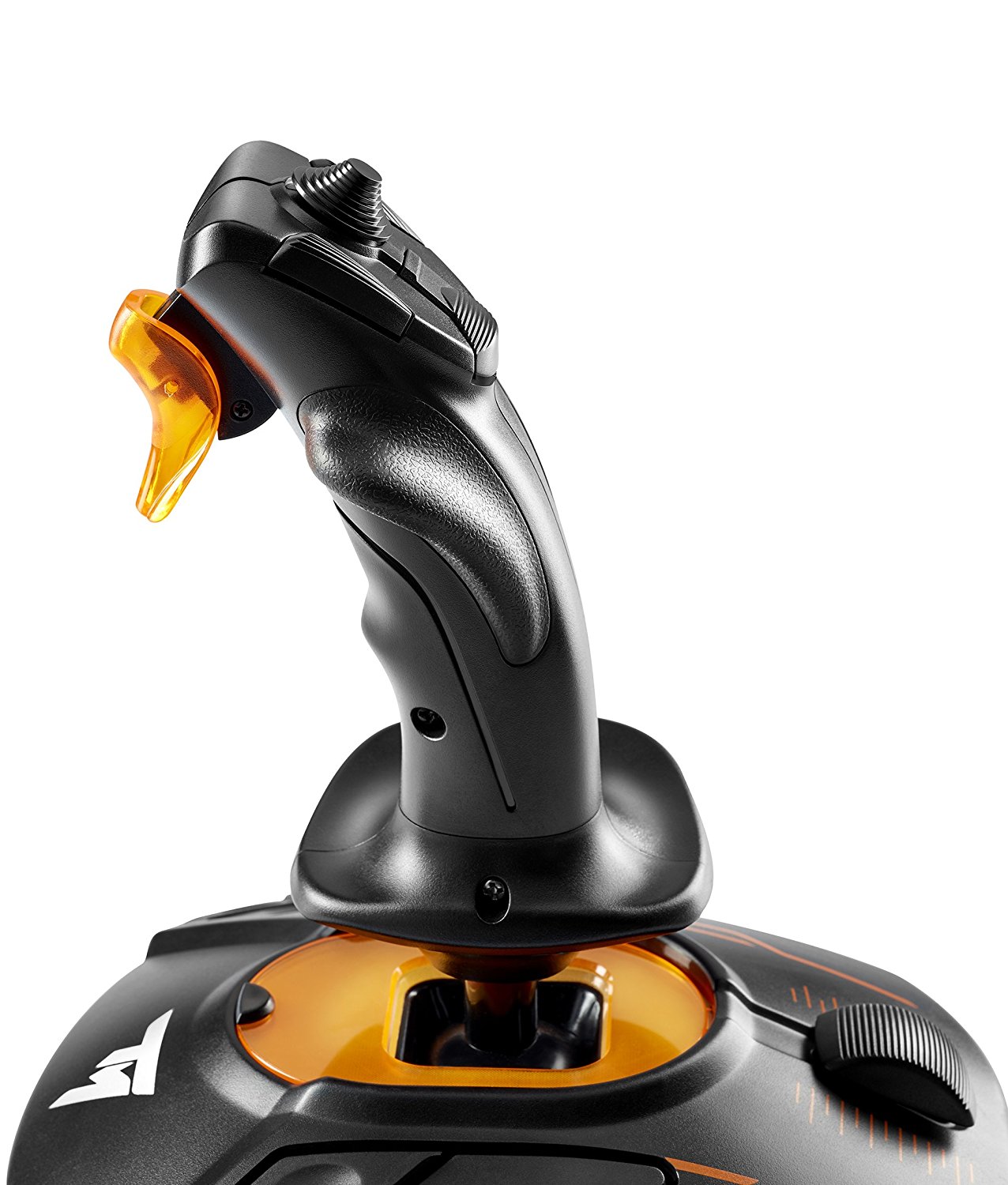 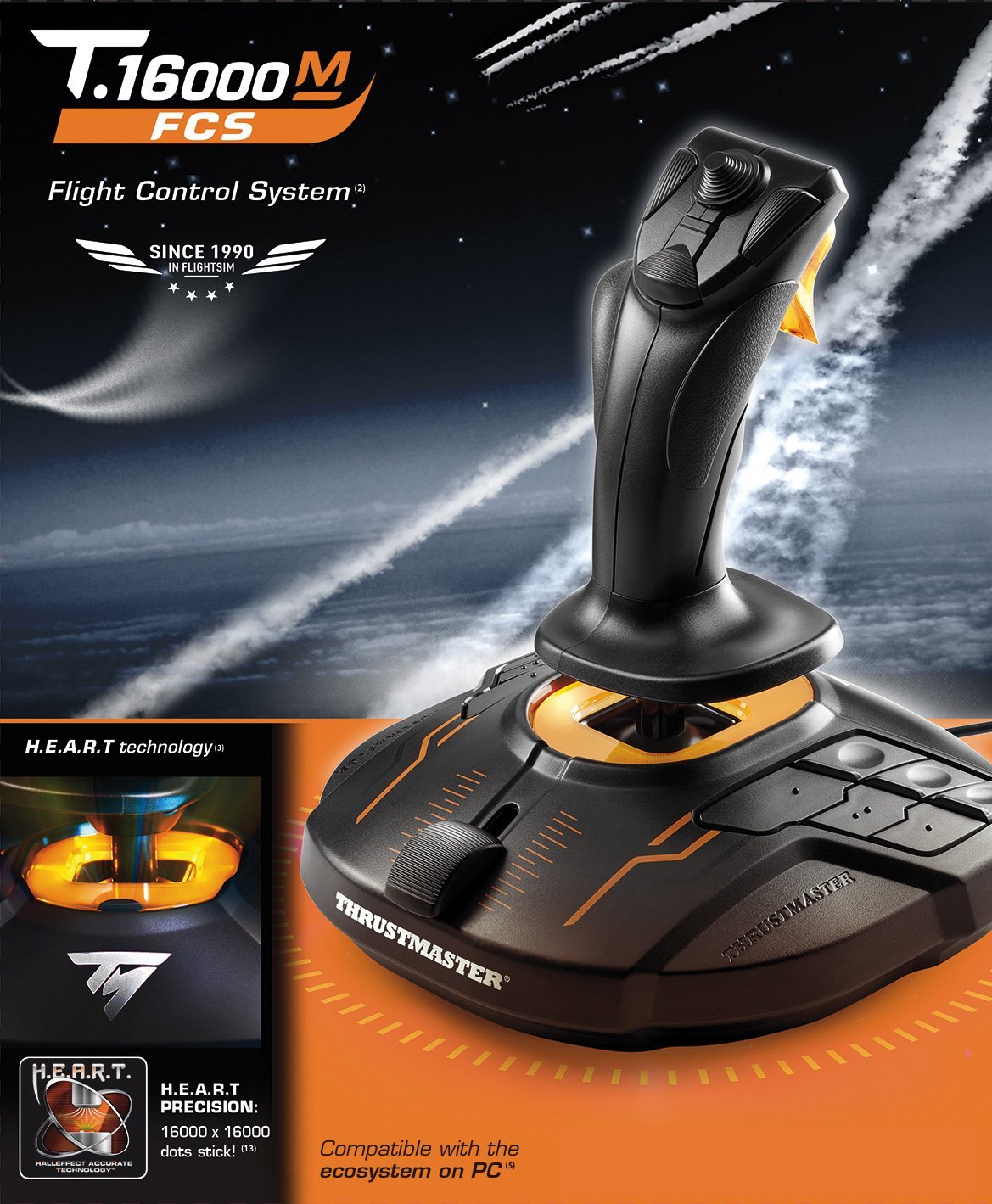 The T.16000M FCS is compatible with PC via USB in Windows 10, 8, 7 and Vista (32-bit and 64-bit). The T.16000M FCS offers you a precision level greater than current systems, which will not decrease over time, thanks to the joystick’s H.E.A.R.T technology. Fully ambidextrous joystick: 3 removable components allow the joystick to be perfectly tailored for left-handed or right-handed use. The joystick includes 16 action buttons with braille style physical button identification and one 8-way Point of View hat switch and 4 independent axes including twist rudder. The T.A.R.G.E.T software allows you to load and create specific mapping profiles for each game.

Thrustmaster has devoted its 25 years of expertise in flight sim controllers to meet the growing demand from flight simmers in general – and space simmers in particular. The T.16000M FCS has been designed for advanced fliers looking for comprehensive, realistic controls as an alternative to using a mouse and keyboard. The T.16000M FCS (Flight Control System) flight stick is compatible with PC via USB in Windows 10, 8, 7 and Vista (32-bit and 64-bit)The T.16000M FCS features 4 independent axes, including twist rudder (controlled by rotating the stick), 16 action buttons with “braille”-style physical button identification, one 8-way Point of View (PoV) hat switch and an ergonomic trigger.

Its striking orange accents and backlighting bring gamers’ immersion to a whole new level. H.E.A.R.T HallEffect AccuRate Technology In order to guarantee exclusive high-precision performance, pitch and roll on the T.16000M FCS flight stick employ H.E.A.R.T HallEffect AccuRate Technology (U.S. patent US08471815) for 16-bit resolution (i.e. 16000 x 16000 values) – the same pinpoint accuracy delivered by the extremely high-end HOTAS Warthog joystick, allowing gamers to engage their enemies with surgical precision. The helical spring (0.1” / 2.8 mm in diameter) inside the stick provides firm, linear and smooth tension. Ambidextrous design The joystick’s unique ambidextrous design can be easily switched between right-handed and left-handed use. Its twisting handle controls the rudder by default, but can also be locked in place. Piloting with a joystick in each hand is now possible in all games compatible with two joysticks.

There are no reviews yet.

Stay in the loop with our weekly newsletter